Financing for Self-Storage Owners: CMBS Lending Is Back 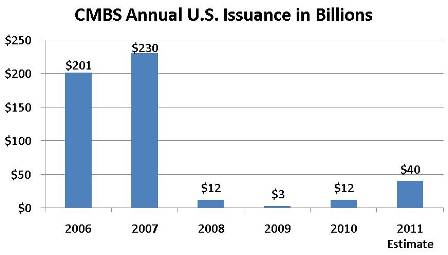 The CMBS (commercial mortgage-backed securities) bond market is back. After slowly returning to life in 2010, the capital markets appear to be in full recovery mode, with more than 20 active conduit lenders. Recent transactions provide evidence that this capital is readily flowing to and having an impact on the self-storage lending market.

As a quick review, CMBS are bonds backed by commercial mortgages. A basic CMBS transaction structure starts with lenders who originate and aggregate pools of loans on commercial properties, and then sell the income stream from the mortgage payments to investors in the form of bonds. When the bonds are sold to the investor community, capital is returned to the lender, who is then able to redeploy it and make more loans. In this structure, capital flows efficiently between borrowers, lenders and investors; hence the name “conduit” is given to lenders who use this finance approach.

Through the first quarter of this year, CMBS issuance was at $8.7 billion. Most notably, Extra Space Storage Inc., the Salt Lake City-based real estate investment trust, received an $82 million first mortgage from Bank of America in January. The capital―the company’s first CMBS loan since February 2007―was used to finance a portfolio of 16 facilities, according to chief financial officer Kent Christensen.

As the financial markets hit bottom in 2008, liquidity almost entirely dried up, and the CMBS market, for all intents and purposes, disappeared. As a result, self-storage operators, along with all other types of commercial real estate borrowers, were forced to use more traditional lenders such as local and regional banks. The net effect of this was less capital available at more stringent terms, including lower leverage, higher debt-service coverage ratios (DSCR), more conservative underwriting, and personal recourse.

More specifically, consider that during the glory days of 2007, CMBS lenders were originating non-recourse debt with a 10-year term and 30-year amortization, at 80 percent loan-to-value (LTV) and 1.20x DSCR. Often the underwriting included credit given to income based on projected future rental increases. In contrast, by the time the market hit rock bottom in 2008/2009, there were no CMBS lenders active in the market, and those lenders that were still originating loans on their balance sheets were doing so with extreme caution: 60 percent LTV, minimum 1.50x DSCR, with income underwritten to a strict trailing 12-month historical income and a look-back of two years or more to guarantee stability of the cash flow.

As a result, the self-storage lending market for many small and mid-sized operators ground to a halt, and even the largest operators were challenged to secure debt on their maturing loans. Those in need of loans (whether for construction, refinancing or acquisitions) were left in a precarious position, with properties worth an average of 20 percent to 30 percent less than they had been pre-crash.

To make matters worse, loans sized to 60 percent LTV down from 80 percent LTV forced borrowers to contribute a 20 percent larger stake in their facilities, difficult for many operators. A significant portion of commercial real estate properties, including self-storage, fell into delinquency, and borrowers were forced to agree to loan terms that some would consider egregious. The alternative was to lose their properties.

Ghia Nellis
Inside Self Storage